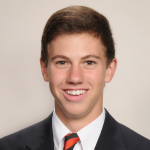 According to a press release, “the award honors a student who has most distinguished himself in the study of religion.”

During the winter trimester, Wall studied at St. John’s College in Johannesburg through Woodberry’s study abroad program. He recently received the fellowship from Woodberry to travel this summer to Sri Lanka, where he will volunteer on Buddhist temple restorations.

Wall, a rising senior, is the son of Jennifer I. Wall, of Farmville.

“In addition to his travels, he will serve as a prefect his senior year (and) is an honor student and serves as Head Ropes Course Safety,” according to the release.

“Woodberry Forest School is a highly selective, independent boarding school in Madison County for 400 boys in grades 9-12 from 25 states, the District of Columbia and 19 other countries. Founded in 1889, it emphasizes an education based on intellectual thoroughness, moral integrity and good sportsmanship.”

Next summer will bring a new look for the two tallest buildings in Farmville. Longwood University’s Curry and Frazer halls... read more