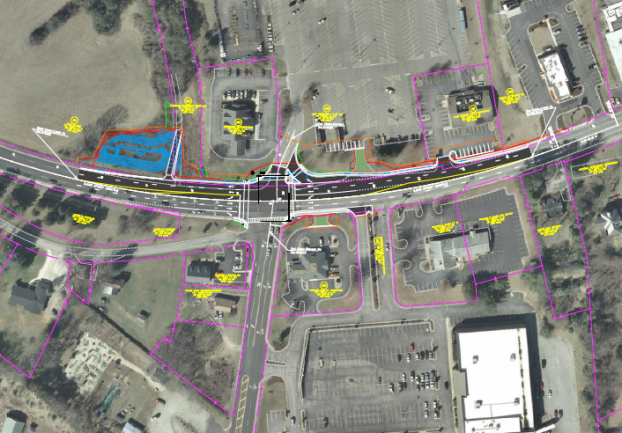 An improvement project that would include adding a protected left-turn lane into Tractor Supply Co. for northbound traffic and the same for Milnwood Road traffic headed southbound could begin in 2021 (photo by the Town of Farmville).

Q: When is widening of South Main Street at Milnwood Road going to begin?

A project that would increase safety and ease of travel at the intersection of South Main Street and Milnwood Road could begin as late as 2021.

According to the Virginia Department of Transportation’s (VDOT) Six-Year Improvement Program website, a majority of funds are set to be allocated toward the project in 2021. According to the Commonwealth Transportation Board’s (CTB) SMARTSCALE Application portal, construction of the project, which would add a protected left-turn lane into Tractor Supply Co. for northbound traffic and the same for Milnwood Road traffic headed south, could begin in 2024. According to the website, the survey, design and environmental phase is underway and could conclude in 2023.

“It’ll actually be adding an additional lane each way,” said Town Manager Gerald Spates, who added the town’s hoping the state will pay for “a good majority” of the project.

“We’ve gone from an estimate of about $2.5 million to $4.5 million now. It’s gone up quite a bit. And a lot of that is federal requirements,” Spates said.

The plans for the intersection have been done “for a couple years,” he said.

“I thought it was going to start two years ago,” Spates said of the project. “I thought we’d be funded by now because we’ve got the plans and everything done, we’ve got all the right of way designated. We’re ready to go. Other than probably 30 days, we could probably be out for bid,” Spates said.

Acknowledging the 2021 start date offered by the SMARTSCALE Portal, VDOT spokeswoman Paula Jones said “it is possible that date will change.”

“I would even think if we would get 80 percent funding we’d probably go ahead and do it,” Spates said of funding from the state.

In August 2015, a schematic of the proposal was displayed for town council members during their work session.

During the work session, Spates speculated that work could get under way in the next 12 months.

The intersection has been the site of numerous accidents.

According to the SMARTSCALE application, the project could see $3.7 million allocated in funding.

“The project includes the construction of new intersection roadway, traffic signal reconstruction and adding (Americans with Disabilities Act)-compliant crosswalks, sidewalks, curb cuts and push buttons to assist pedestrians with safely crossing the road,” according to the SMARTSCALE website. “Coordination is underway with VDOT and the Federal Highway Administration to ensure this project complies with state and federal regulations that protect the natural, built and human environment. There will be no relocations of homes or businesses, no adverse effect on historic properties and no permits required from the U.S. Army Corps of Engineers. The purpose of this project is to enhance the safety of this high-traffic volume and high-accident intersection. This project is Farmville’s number one priority and is the only (House Bill 2) project application.”

Allegations discussed against youth league — Organization ‘split down the middle’

Allegations of people drinking alcohol at Gene Dixon Memorial Park, along with coaches having consumed alcohol before or during games,... read more