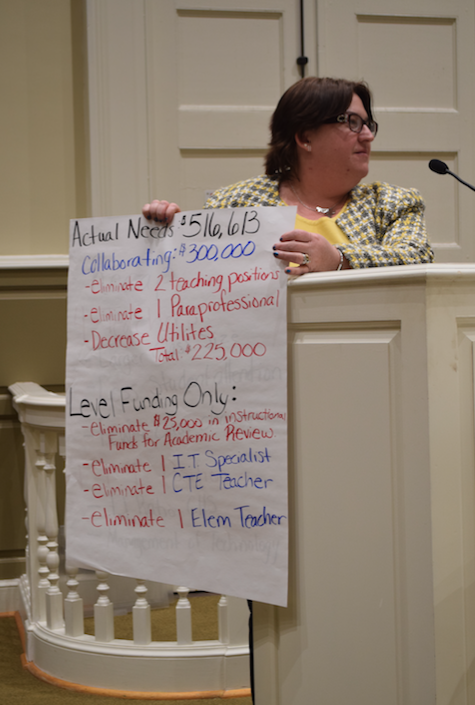 BRIAN KLINGENFUS | HERALD Ashley Long, a fifth-grade teacher at Cumberland Middle School, provided a visual interpretation of what she said could happen if the school board does not receive the funding it’s seeking from the board of supervisors.

Educators plead for funding: Six positions could be eliminated at schools

The hearing provided the opportunity for the board to inform the public of its proposed budget, allowing the community to speak before potentially adopting a budget Tuesday.

The Cumberland County School Board asked supervisors for an additional $300,000 more than the local money the schools received in the current fiscal year. School leaders said the $300,000 is down from an “actual need” of $516,613.

The board of supervisors — in adopting their proposed budget for advertisement — is recommending level funding for the schools or the same amount of local money they received in the current fiscal year.

Griffin said three positions — two teaching positions and one paraprofessional — would be eliminated even if the school receives the requested $300,000.

If the school receives level funding, Griffin is proposing eliminating $25,000 in instructional funds for academic review and three additional positions: one elementary school teacher, one career and technical education teacher and one IT specialist.

Teacher Parrish Mort said education was crucial to the economic growth of the region, and better funding would lead to a better education.

“Economic development will not happen in this community until we have affordable housing and top-rated schools. We will not get businesses to bring their people here because their people won’t want to live in Cumberland County if they don’t have those resources,” Mort said. “Do I believe kids are the most important thing? Absolutely. But, for those who don’t believe we need more money for our students, think about the county: you say you want the county to grow. (To do that), you need to invest in your schools.”

District Four Supervisor David Meinhard said he wished the board had more funds to provide the schools with everything they asked, but that was no easy task.

“I would love for us to have a truckload of $1,000 bills to pull out here so we can (provide) all of the funds you guys are asking for,” Meinhard said. “Just some rough figures from my standpoint, though, if we were to fund the $300,000, we would be looking at a four, four-and-a-half cent increase in real estate taxes. Now, all of you who would like that stand up and holler.”

Teachers also spoke during the second public comment portion of the meeting, reiterating the importance of the requested additional funding.

Virginia Gills, principal of Cumberland Elementary School, asked the board to keep in mind the impact a loss of six jobs could have.

“We are grieving,” Gills said. “We’re not grieving about the carpet that we desperately need or the grandstands that are questionable. We’re grieving because we have a loss of positions. When Dr. Griffin mentioned (a) reduction in force, there was some trauma that came back to the staff. I thought to myself, ‘How can we do what we do with anything less? It is impossible.’ And we are not just talking about six positions. We are talking about six people.”

Supervisors said they were sympathetic to the teachers and the school board, noting the decision was not an easy one.

“If we had the funds that were available, I would look to fully fund (the schools) … and would be looking for having (better) salaries in Cumberland County,” District One Supervisor Bill Osl said. “The last time we did that, all three schools were fully accredited. I’d love to be back in that position to be able to do that again, but we simply don’t have the wherewithal to be able to do that.”

Meinhard brought up the option of eliminating the land-use tax program for agriculture and forestry, noting doing so would save the county enough money to provide the money the schools needed and more.

“That would bring in somewhere between $600,000 and $700,000 in revenue for the county, which could be used to not only fund the schools but also to reduce some of the exorbitantly high tax rate in the county.”

When asked about that possibility and whether the land-use tax would be discussed before the final budget was adopted next week, County Administrator and County Attorney Vivian Seay Giles said she was not sure if the topic would be discussed.

Before adjourning into closed session, District Three Supervisor and Board Chairman Kevin Ingle stood and addressed the teachers, starting an ovation and loud applause for the school staff.

The board will discuss and potentially vote to adopt the proposed budget Tuesday.

Green named Teacher of the Year