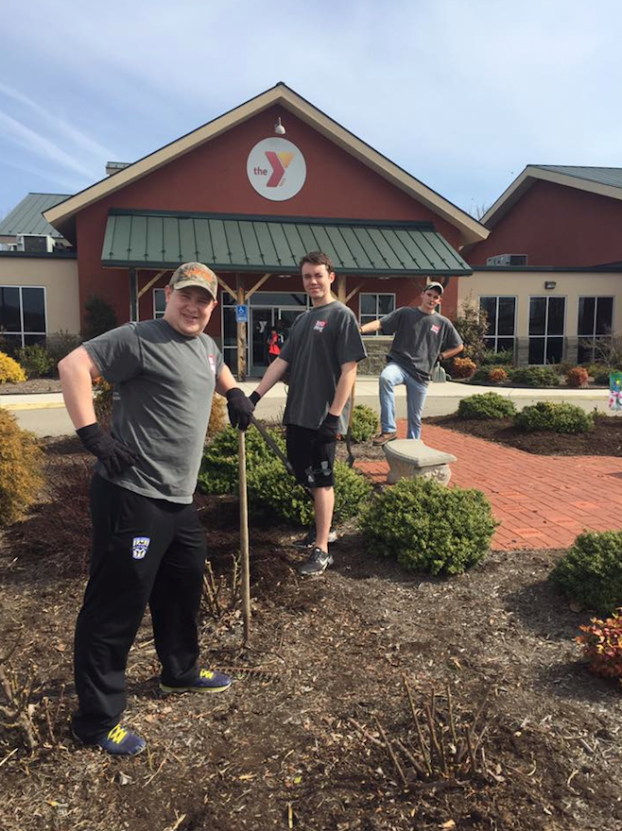 Pictured, from left, Hampden-Sydney College (H-SC) students Duncan Keeley, Raleigh Jernigan and Garner Bayless work to spruce up of the exterior of the Southside Virginia Family YMCA during Saturday’s Big Event. See more photos on A2 and online at www.FarmvilleHerald.com.

The Big Event began in 1982 at Texas A&M University as a way for students at the school to say “thank you” to the community. The one-day service project quickly gained momentum, and today schools across the nation host their own Big Events.

H-SC joined the list of schools in 2011 with 110 volunteers. Since then, that number has nearly doubled, according to H-SC’s website. 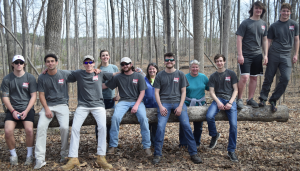 “We are always trying to connect students with the greater community,” Cooke said. “The Big Event is a great way to do this.”

In groups, students reported to their assigned locations and performed whatever tasks were asked of them, including building a low ropes course and outdoor area behind Prince Edward County High School, general maintenance, cleaning and organizing food at FACES, pulling weeds and re-mulching the front of the YMCA and its parking lots and children’s playgrounds and clearing trash from waterways with Friends of the Appomattox River.

The area behind the high school where H-SC students worked consists of a circle of benches for outdoor lectures and other events, a one-mile walking trail and the low ropes course.

Janet Green, who teaches health and physical education in Prince Edward, said she felt the students needed a place to have the opportunity to learn outdoors.

“I think a lot of kids these days stay indoors more than when I was young,” said Green. “So, I’m just trying to get them to appreciate and take care of the outdoors and be stewards of the environment.”

Emily Camden, an agriculture teacher and colleague of Green’s, said she was very grateful to have the H-SC 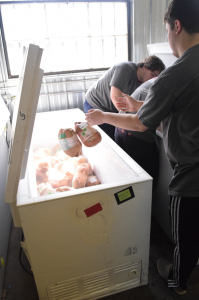 Brothers from Delta Kappa Epsilon clean and organize the FACES Food Pantry. One of the tasks was cleaning out and scraping ice from the freezers.

“I think it’s important for us to get all of our community involved as well, because then they can also share the importance of what we’re doing,” Camden said. “When you have more people come together, you can get more work done in less time and have things ready a lot sooner so we can have the community come out and use it as well.”

Miles Sadler, a member of the fraternity, said he enjoys volunteering.

“Service feels good,” Sadler said. “To know that I’m contributing to an organization that has been operating for so long … I like it. I enjoy it.”

The fraternity’s president, William Milburn, said more than half of DKE came out to the lend a hand for The Big Event.

Milburn said he was personally interested in helping, and when he found out the event needed more people, he rallied more of his fraternity brothers to help.

Sheila Hight, director and USDA manager for FACES, said she was beyond grateful for the help The Big Event provided.

“I cannot brag on those boys enough,” she said. “These young men cleaned and scraped ice out of freezers, pulled weeds, moved pallets, cleaned up trash and debris, organized and straightened things up … They did a lot of manual labor that I could not get done any other way,” Hight said. 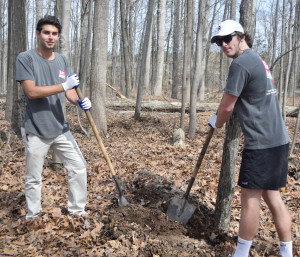 “It’s a very important event for me and for FACES.”

Cooke said she is proud of how well the event turned out.

“I love it. We have certain groups that do service all year round, so when we tap the ones that haven’t been doing it all year round, it’s special,” said Cooke. “It’s all part of our plan for having good men and good citizens here at Hampden-Sydney.”