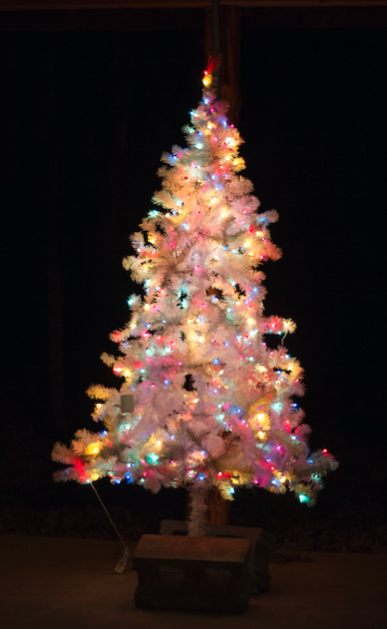 A new Christmas tradition has brought together a small community to remember the “reason for the season.”

The Virso Community Center, in Prince Edward County, has initiated a new tradition of displaying a Christmas Tree in the community center pavilion each year.

Jerry Townsend, who represents the Leigh District on the county board of supervisors, said the idea for a tree was first brought to him by Board Chairman Howard Simpson, who represents Farmville District 101.

Townsend said he mentioned it to the treasurer of the community center. “We thought it would be nice if we had a Christmas Tree and to decorate the pavilion for Christmas,” Townsend said, noting organizers wanted to have a tree to represent the community. The Virso Recreation Committee helped make the idea a reality.

“That came to fruition, and it received a lot of compliments from the residents in the community about how nice it looked,” Townsend said.

Townsend said the tree has had a very positive impact on the community. The new initiative will be continued and expanded during the years to come.

Next year, Townsend wants to see the start of an annual Community Christmas Tree Lighting. He said the residents of the county could unite to sing some Christmas carols and celebrate the lighting of the tree.

He said the tree presents an opportunity to bring citizens and residents of the Virso community together to recognize the birth of Jesus Christ and to get to know their neighbors.

Though Farmville has a Christmas Tree, Townsend said, “Very seldom do you have a Christmas lighting by counties in the rural areas.”

“That’s probably the first one I’ve heard about … in the county,” he said. “It certainly gives the community a different appearance.”

“We want to be a community that works together to be better and to grow and to prosper,” he said, noting that the tree is meant to symbolize the “reason for the season, and that is Christ’s birth.”

The tree has been up for about two weeks and will stay up through the new year.

The three candidates seeking to represent Virginia’s 22nd Senate District in Richmond will participate in a candidate forum Wednesday at... read more