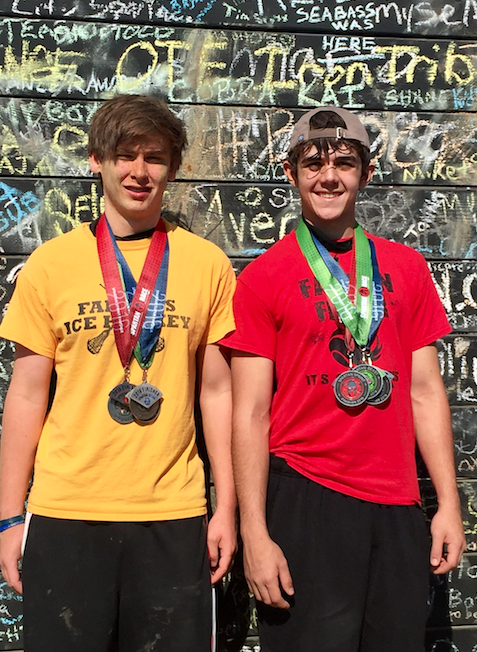 Fuqua School students Andrew Horton, left, and Isaac Drummond sport their Trifecta medals in front of the “Inspiration Wall” after the Spartan Beast held in Winnsboro, S.C., on Oct 30. Competitors write their reasons for running in the event on the wall. Horton and Drummond both placed in the top 10 of their age group.

Back in the spring, Fuqua School students Isaac Drummond, Andrew Horton and Audra Murphy competed in their first Spartan Challenge — which involved sprints — in Charlotte, N.C.

Recently, Isaac and Andrew went on to tackle the next two levels.

According to a Fuqua press release, the Spartan Super, held in Wintergreen on Sept. 8, included a “grueling” 8.9-mile event up and down ski slopes with a total of 29 challenges. Some people say it’s the toughest race on the Eastern Seaboard because of all the ups and downs, according to the release. 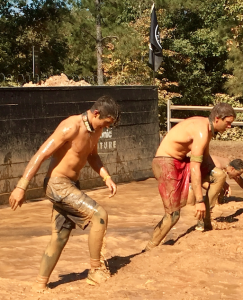 Fuqua School students Isaac Drummond, left, in black shorts, and Andrew Horton, right, in red shorts, compete in the Underwater Wall where you have to jump into the water pit on the other side and then duck or dive under the wall to emerge on the other side.

“It took us a little more than four hours to complete — compared to the sprint, which was only 5.5 miles and 25 obstacles, and took us about one and a half hours,” Isaac said.

Following the Super, the pair competed in their final race, the Spartan Beast, in Winnsboro, S.C., on Oct. 30. It was a 13-mile event with 35 challenges, which they were able to complete in only five hours, both placing in the top 10 of their age group.

In the second and third races, the boys competed together.

“It really helped having a teammate there to give you support when the obstacles seemed too much,” Isaac said. “We’re both in pretty good shape, but there are some things that we still had a hard time with like the spear throw and the Hercules pull. But, I was really proud that we both made it up the rope climb — that was something that I missed in the first race. All in all, I just had to do three sets of 30 burpees (an alternate option for those who can not complete an obstacle) — so, making it through 26 out of the 29, I felt pretty good about.”

According to Andrew, Spartan Challenges test participants physically and mentally.

What does conservation look like to you? Is it conservation practices in your county or town? Is it in the... read more