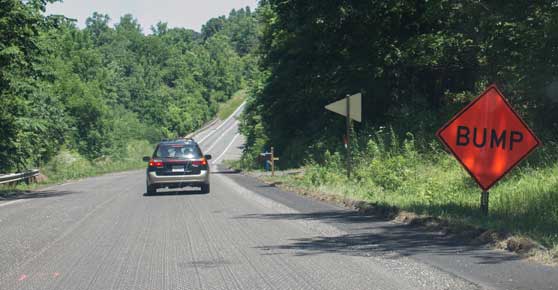 A segment of U.S. Route 15 between Farmville and Dillwyn is in the midst of a repaving project that is set for completion in the next two weeks. (Photo by Carson Reeher)

Q: Why is U.S. Route 15 between Dillwyn and Farmville being paved again? Wasn’t the road just paved last summer?

The Virginia Department of Transportation is in the midst of a repaving project on U.S. Route 15 between Farmville and Dillwyn south of the Willis River.

According to VDOT Maintenance Operations Manager Bill King, the project is much-needed. King said the segment of the roadway has not been paved in at least 12 years, making it eligible for repaving.

According to Paula Jones, VDOT communications manager, the last time it was paved was in 2002.

Over recent years, VDOT has worked to improve Route 15, the agency stated.

He also mentioned an ongoing paving project between Routes 20 and 15.

According to King, the only other recent construction on Route 15 was the application of a surry seal asphalt treatment to help decrease weathering and cracking.

King said the section currently being repaved hasn’t been resurfaced in recent years.

According to King, this section was not eligible for repavement last year.

The construction began about a week-and- a-half ago, said King. Contractors will finish construction in about two weeks.

According to King, construction will not begin until later in the summer. It will not take as long as the current project.

King estimated the paving will take about two or three weeks.

He said contractors have a pilot vehicle in the zone so vehicles do not drive through fresh tar or get into accidents.

Construction will continue to take place Monday-Friday, 11 hours per day as long as there are no weather-related delays, King said.

According to King, no VDOT construction will take place over the July 4 weekend to minimize traffic delays and inconvenience.