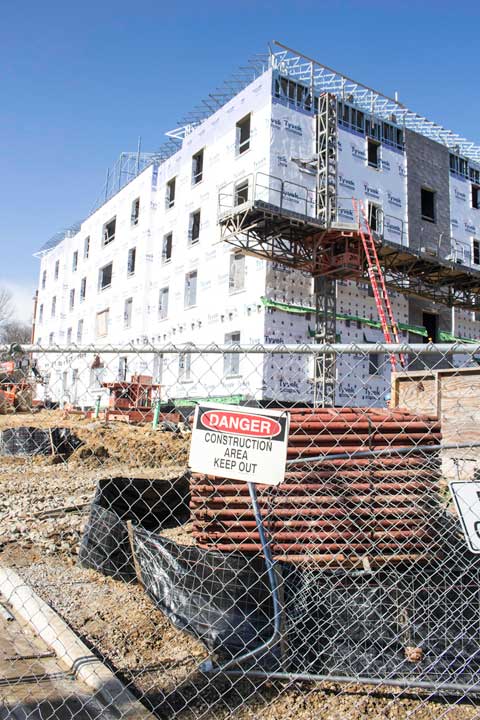 What is Longwood building at the corner of Race and Redford streets? Does it have anything to do with the vice presidential debate?

Each morning local residents and on-campus students can hear the noises of hammers pounding on steel barriers and can view two new structures coming into view.

Capital Design and Construction company has been working on schedule to complete two new residence halls. The dormitories at the intersection of Race and Redford streets on Longwood University’s main campus should be ready by the fall semester. “We are all optimistic we will have use of the facilities in the fall,” said Doug Howell, associate director of residential operations.

According to Longwood spokesman Matt McWilliams, the dormitories are “on track” to be completed to “house students” in the fall.

said McWilliams. According to the Campus Impact Committee’s master plan, the project is estimated at $16 million.

“We are all optimistic we will have use of the facilities in the fall,” said Howell. The two dorms, which will form a quad with Arc Hall, are estimated to be 53,000-square-feet in size. At a smaller capacity than most dorms on campus, the suites will be styled for double rooms instead of the triple suites used in Arc or Stubbs. According to McWilliams, the furniture and fixtures will be added into the buildings during the summer. Howell explained that the facilities will be co-ed and will house all classes of students — not just sophomore residents. “At this point, we are planning for all classes,” said Howell.

Together the twin dormitories will hold over 200 students. Although the dorms were originally considered for upperclassmen — specifically sophomores — it is ultimately up to the university’s Office of Residential and Commuter Life (RCL) to decide who lives in the dorms.

McWilliams said that the dorms create an opportunity for students “[to form] a community of vibrant people who interact socially and academically.”

On top of planning and advising on the construction of the new residence halls, as well as other constructions on campus, the university is in the process of preparing for the 2016 vice presidential debate.

“We’ve begun the initial planning stages,” said McWilliams regarding the debate. Longwood announced in September that the campus would host the debate on Oct. 4.

Many events will be themed around the debate on and off campus. According to McWilliams, the students will be on a “coordinated” fall break during the event, allowing for the campus traffic to be somewhat reduced during the massive media event. The construction of the new residence halls is specifically for students, and will not be used by the media professionals coming to campus for the event. “Reporters won’t be housed on campus,” said McWilliams.

The new residence halls, though newly constructed, are listed as main campus units for the upcoming student registration. According to the RCL’s website, in accordance with the Longwood Board of Visitors, the room and board rate per semester for the new dorms are the same as other dorms at $3,325.