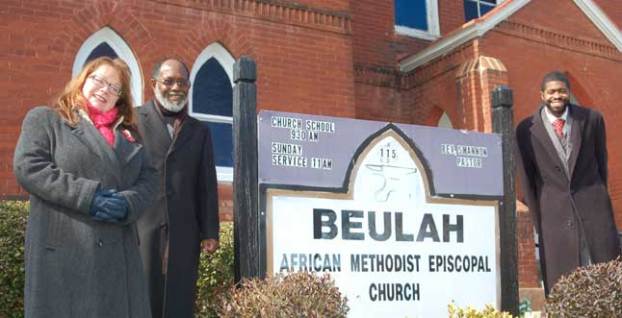 Farmville Area Rescue Mission president Johnna Schular, left, and board member Monroe Preston, center, coordinate shelter for the homeless from January to March. At right is the Rev. Matthew Shannon, pastor of Beulah AME Church, supporter of the rescue mission since its beginning in 2011.

A brisk wind whistles around Beulah African Methodist Episcopal Church on a 20-degree day as Pastor Matthew Shannon and Monroe Preston step outside. They don’t mind braving the cold for a simple reason — they can go back inside. The individuals Shannon and Preston help through Farmville Area Rescue Mission for the Homeless (FARM) are not so fortunate.

Statistics on homelessness for the Farmville area are surprising.

Six years ago Schular recognized the need for a local rescue mission, and a group of concerned residents decided to meet and discuss the homeless problem. The organization that resulted was called the Local Rescue Mission for the Homeless.

“We started meeting in October 2010, and started housing in January 2011,” Schular said.

“We have about ten churches that support us, and four that shelter for us,” Schular said.

“If we find the individuals need clothes, say they come in from the snow or rain, we pull clothes out of storage and redress them,” Schular said.

“One of the things that hurts my heart is — when you’re in crisis you can’t really think,” Schular said. “Sometimes just sitting in a quiet place helps. We also have these wise older people in the church who ask, ‘Have you tried this, or have you tried that?’ They actually come up with some good answers.”

“There aren’t that many people lying on the street corners in Farmville, Virginia, but there are a slew of people who need help and don’t know where to get it, Larry Lehman, head of the local Salvation Army, said.

Lehman described an experience in 2012. “That first man who stayed with us talked about the care he felt and the discussions he had with the people who stayed at the church with him. That seemed to mean more to him than having a safe place to sleep — that someone showed an interest in him as a human being,” he said.

In addition to providing food and shelter, FARM strives to find solutions for its homeless guests.

Recently the Salvation Army provided a bus ticket for a homeless a man with family in Ohio.

“When the bus driver realized we were working with the Salvation Army he took the man home for free,” Schular said.

Requests for assistance, Schular explained, come from many sources.

“STEPS calls us, FAMA (Farmville Area Ministerial Association) — we get calls from them,” Schular said. “Probation and parole has asked us to house, we get calls from Social Services. One night the hospital called and said there was a homeless man outside.”

While the local rescue mission is pleased with the assistance they provide, the ultimate goal is a permanent year-round facility.

“When you’re open in that January to March window and then you shut down — people will still call for help weeks later,” Schular said. “That’s why we need a year-round shelter. My dream would be to have a facility where we could help them move on and find a home.”

Often it is a simple thing that prevents a homeless person from moving on.

“One of the homeless men needed some work boots to get a job,” Schular said. “Sometimes it’s just one thing that keeps you from taking that next step.”

Bringing the homeless home, the local rescue mission believes, is exactly what Jesus would do.

Badeaux’s no longer at Bar 202

By Briana Adhikusuma The Rotunda The sign for Badeaux’s Cajun Kitchen has been taken down outside of the restaurant and... read more