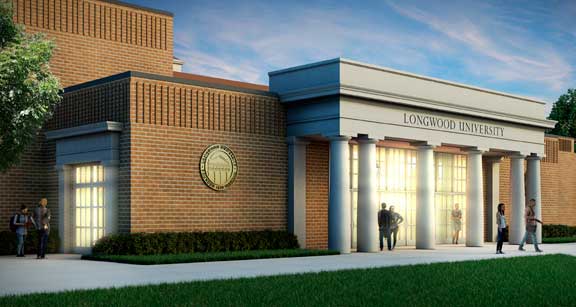 Pictured is a rendering of the proposed improvements to Longwood University’s Willett Hall. Renovations to the Brock Commons entrance will include the addition of columns, additional doors on the north and south sides of the entrance and the Longwood seal displayed on each side of the main doors.

Will Longwood’s Willett Hall see any upgrades or improvements before the vice presidential debate in October?

Construction is set to begin in late March on improvements to Longwood’s Willett Hall in preparation for the vice presidential debate in October.

According to Louise Waller, Longwood University’s executive director of campus planning, construction and real estate foundation, the project is small but very significant.

“When we found out [the Commission on Presidential Debates] wanted to use Willett Hall as the location for the VP debate, it was a wonderful opportunity to correct the façade on the Brock Commons side to match the traditional architecture on the northern side of campus that our

She said the university wanted to make sure it put its best foot forward when being showcased to the world.

“One of the really useful things about the debate is it gives us a deadline to move ahead and get done some things that are worth doing for the long-term anyway,” said Justin Pope, the chief of staff to Longwood President W. Taylor Reveley IV. “Willett is a perfect example.”

The planned renovations include installing traditional columns on the front of Willett, which faces Brock Commons, and improving building access.

The renovations will also include the addition of two new doors on the north and south side of the building entrance facing Brock Commons.

The university’s seal will be displayed on each side of the improved entrance, she said.

“Because it’s really hard to make modifications like that without triggering things that will happen inside, there’s some minor improvements that we’re doing inside as a result of the facade work,” Waller said.

Modifications inside Willett will include addressing lighting and wall deficiencies. The primary work will be to the outside of the building on the Brock Commons side.

“We’re really excited about the Willett project because it allows us to expedite a project that needed to take place anyway and will provide a beautiful face to Willett, not only for the debate, but also for our academic and athletic programs that use the facility,” Waller said. “We know that Willett, Longwood and Farmville are going to show much better in the vice presidential debate with these improvements.”

Little Diversified Architectural Consulting and Frank & Lohsen are the architectural teams that helped put the project rendering together.

“As our planning shifts into high gear, we’re intensely focused on making sure there’s a legacy of this debate that remains after next Oct. 4, both in terms of the spirit of the place and the physical campus,” Pope said.

The project is expected to be completed over the summer. A cost estimate was not available, Waller said.