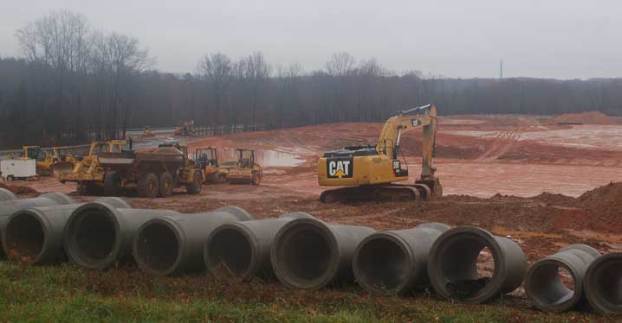 Grading is underway at the site of the planned new asphalt plant and expanded concrete plant on U.S. Route 460 near Hudson’s Bottom west of Farmville.

What’s going on with the dirt moving and grading on U.S. 460 west of Farmville?

Grading is underway on U.S. Route 460 east near Hudson’s Bottom between Prospect and Farmville for the new locations of W.C. Newman Co. and Adams Construction Co., which expect to be operational in June and April, respectively.

The new sites will allow W.C. Newman to manufacture and distribute more concrete and Adams Construction to make and transport asphalt.

In November 2014, Prince Edward County supervisors approved of a rezoning request and special use permit to allow for the construction of the facilities on about 50 acres of land

“The [existing] plant’s pretty old,” said Robert Atkinson, president and owner of W.C. Newman, currently located on West Third Street in Farmville. “We’ve patched our patches over and over again. The physical plant itself … is pretty old. We’re also in this small lot here in the middle of town.”

The current location of the business offers no room for expansion or upgrading, Atkinson said. The property on 460 will allow for more room for a more modern and efficient operation, he said.

The company, which has been in existence for over 100 years, sold the West Third Street property to Walk2Campus in March 2014, which includes a 4.5-acre parcel and a 56-acre parcel.

Of the 50 acres of property on 460, Atkinson said that about 37 were cleared for use. Of that amount, about half will be used for the concrete plant and the other half for the asphalt plant, according to both Atkinson and Rick James, an executive vice president of Adams Construction.

Grading of the property is nearing completion for the concrete plant, while grading for the site of the asphalt plant is expected to begin soon.

“Our [existing] plant is what’s called a two-stop plant,” Atkinson said, calling the process slower than what’s being planned on the new site.

The new plant is expected to produce about 120 yards of cement per hour compared to the existing plant’s 100. The new plant will be more efficient, he said, and will allow for a better mix of concrete.

“We’ll be able to handle one more aggregate,” Atkinson said, noting that the new plant will have the ability to handle four aggregates compared to the current plant’s three.

He expects construction to begin sometime in January 2016.

“Our goal is to be up and operational by the first of April 2016,” James said of Adams Construction on 460.

He said the layout of the plant has been delayed by weather, but could begin in January when construction and erection could also begin.

James, whose firm is based in Roanoke, said the company has asphalt plants on 460 in Petersburg and Lynchburg.

“We pull from both of those facilities back toward the middle … We saw Farmville in the mid-point along the 460 corridor and needed that location to better service 460,” he said.

“All of our asphalt facilities are VDOT certified,” he said, noting that larger housing and commercial developments require state standards and specifications for asphalt on roadways.

“We’re more of an infrastructure type of contractor meaning we focus on larger types of projects,” he said.

New jobs could be associated with the operation of both plants.

Who will oversee security at the vice presidential debate next year? Longwood University and Farmville will see an increased police... read more