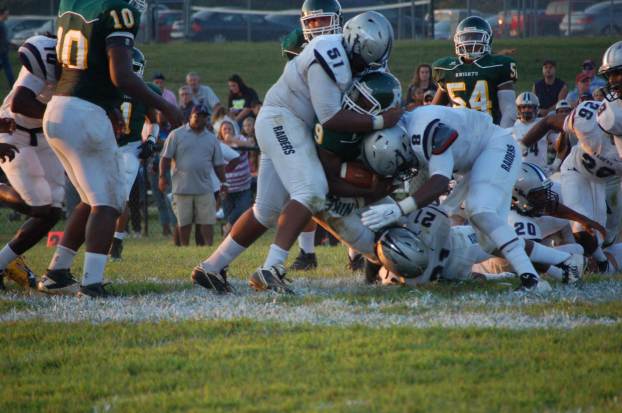 Appomattox scored a touchdown and extra point in the first quarter to kick off the game. It was a hard-fought defensive game after that as both teams would not allow another score until the fourth quarter.

Just when hope seemed lost, Leon Ragland caught a 14-yard touchdown pass by B.J. Gough with 14 seconds left in the game. The extra point was scored by Brycen Newby.

The Knights held the Raiders until the end of regulation and overtime set in.

Unfortunately for the Knights, Appomattox scored a touchdown and an extra point at the beginning of overtime. When Buckingham stepped up to try, a Raider intercepted a pass to a Knight in the end zone and the game ended.

“Coach (Seth) Wilkerson had a good game plan and the defense executed it well. We just fell short on offense. It was a great performance by our defense,” said BCHS head coach Craig Gill.

Ragland led the Knights with three catches for 58 yards, 54 yards rushing and a touchdown. He also had four tackles on defense.

B.J. Gough went 5-for-8 in passing and rushed for 48 yards. He threw the touchdown pass as well.

Erik Companion led the Knights in defense with 10 tackles. Hunter Edwards, Gough and Michael Mabry had six tackles each.

“I feel sorry for the guys taking a loss like that when they played so hard. It showed a lot of character from the boys and our great coaching staff,” said Gill. “We are just going to have to erase that from our mind and start over this week.”

The Knights will return to action on Friday when they trek to Chatham High School for a 7 p.m. game.