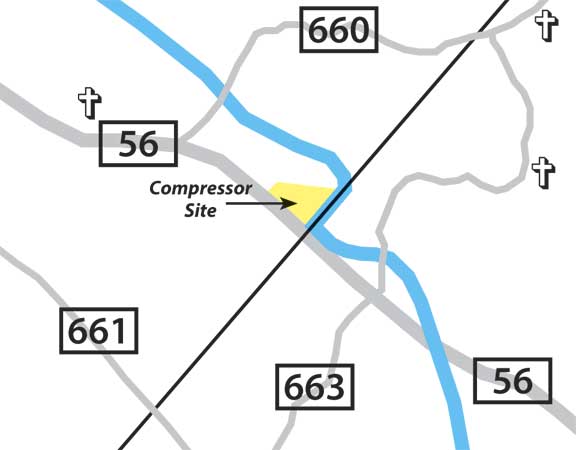 The 68.5-acre tract of land Atlantic Coast Pipeline (ACP) purchased for $2.5 million is located along Route 56 between Shelton Store and Union Hill roads. The property, in yellow, is where the proposed compressor station would be located. The proposed ACP route is in blue, while the existing Tranco line is in black. The roads are represented in gray, while crosses represent nearby churches.

The tract is just northwest of the Union Hill community along Route 56, just southeast of Shelton Store Road.

“The ACP would cross and connect to an existing Transco interstate natural gas pipeline on the parcel of land,” said Dominion spokesman Jim Norvelle.

ACP purchased the land on Aug. 20 from Variety Shade Landowners of Virginia Inc. for $2.5 million, according to Norvelle.

“Compressor stations typically need about 10-15 acres for its facilities,” Norvelle said. “The remaining acreage would be left intact as a visual and noise buffer. The compressor station must comply with federal and state environmental laws, including noise and air emission regulations.”

Along with the announcement of the purchase, Norvelle confirmed that a slight route adjustment was made in the area of the site to allow for the intersection of the ACP with the Transco line on the property.

Kenda Hanuman, a spokesperson for Friends of Buckingham, a group opposed to the proposed project, said she was surprised at the small size of the parcel. “We’re obviously distressed about the fact that it is in such close proximity to two churches there, Union Hill and Union Grove. That will have an enormous impact on their ability to have their church there,” she said.

According to Norvelle, the tract of primarily mixed hardwood and pine trees is on the northern side of Route 56 approximately three-quarters of a mile east of the Route 56 intersection with Union

The proposed compressor station would contain four gas-driven turbines, which combined would provide approximately 41,000 horsepower of compression. The station would include approximately six structures: a compressor, auxiliary, office, utility gas, drum storage and storage buildings, with a security fence installed around the site, Norvelle said.

Air emissions and noise from the station would meet regulations that are set to protect the public health, he said.

In June, ACP purchased about 148 acres in Buckingham for $225,000 from KWP LLC as an alternate site had this primary location not been available. ACP has not determined what it will do with the alternate site, Norvelle said.

Dominion is the lead partner in a joint venture seeking federal approval of a 550-mile natural gas pipeline that would travel through Buckingham, Cumberland and Prince Edward counties.

“If approved by the Federal Energy Regulatory Commission, the …  pipeline would move abundant supplies of natural gas in the Appalachian Basin from West Virginia into Virginia and North Carolina for utilities that need new supplies of energy for power stations and residential, commercial and industrial customers,” Norvelle said.

You Asked: The price flux at the pump

Q: How come our gas prices are so much higher than Powhatan, Dillwyn and so on? Powhatan is selling gas for... read more