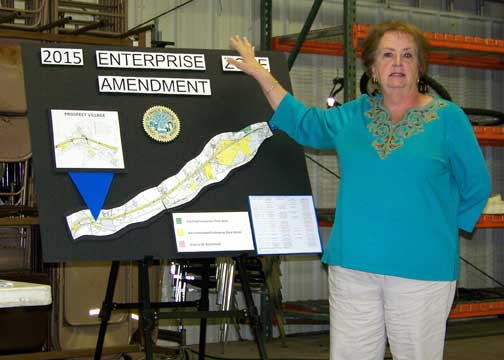 Prospect District 601 citizens were given a preview of the proposed 2015 Enterprise Zone Amendment which will expand the Farmville enterprise zone westward along the U.S. Highway 460 Corridor from Dowdy’s Corner to Pamplin.  Business owners who participate in this enterprise zone are eligible for grants from the state of Virginia to renovate or build onto their existing businesses.  Current businesses and former business sites are eligible for inclusion in this zone.  Sharon Carney, county economic developer, provided information about those already signed on to the enterprise zone amendment and others who have been contacted.

Rumbles of thunder, flashes of lightning, and showers of rain did not keep Prospect District citizens from attending the town hall meeting hosted by Supervisor Calvin Gray on Monday evening.  Representatives from the Prospect Volunteer Fire Department, County Department of Economic Development, County Administrator, Virginia Department of Transportation, and the Prince Edward Sheriff’s Department spoke on issues concerning the district and the county and fielded questions from the audience.

Chief Al Mason of the Prospect Volunteer Fire Department gave an overview of the department stating that it currently maintains eight emergency vehicles with an all volunteer membership of over 30 fire fighters.  There is tremendous cost involved with the maintenance of the equipment and staff training.  The county supervisors give their support but additional funds are raised through the efforts of the Prospect Volunteer Fire Department Auxiliary with their children’s consignment sales and suppers.  They will be hosting a meatloaf supper on June 20 from 5 p.m. to 7 p.m.

Sharon Carney from the county office of economic development presented the proposed 2015 Enterprise Zone Amendment which will include businesses along the 460 corridor west from Dowdy’s Corner to Pamplin.  Those business owners who wish to join this program could be eligible for grants to renovate or construct new buildings.  This program is funded by the Virginia Department of Housing and Community Development and involves no use of local tax dollars. Several business along the proposed expanded zone have already agreed to participate.  There will be a public hearing on the Enterprise Zone Amendment in July.

Carney also spoke to the progress on the rebuilding of the Prospect Depot.  Currently all of the agencies involved, VDOT, BCOM, DCR, DHR, and the Prospect Historical Society are working on a memorandum of agreement to make changes to the original specifications of the VDOT grants to allow the Depot to be rebuilt with new materials instead of trying to restore it to its original specifications of over 150 years ago.  Once this is done and presented to the federal highway administration and approved, then a call for construction bids can be issued, hopefully in October or November.  The Depot will serve as a High Bridge Trail head, will be a rest stop with restrooms with running water for trail users, will have a meeting room suitable for community events, and will have a transportation museum display.

Kevin Wright from the Dillwyn residence office of VDOT says that a study is being done on the feasibility of dynamic flashing lights before the intersection of County Road 626 and U.S. Highway 460.  He says that the extension of the guard rail  in the curve and the stop markings in the intersection median have reduced the number of accidents that have occurred there, but the addition of flashing lights that are triggered by the presence of a vehicle at the intersection will also catch motorist’s attention.

Wright pointed out that the county road workers will be spending a majority of their time mowing the road sides.  The contractor who had been hired for the job went out of business.  County roads are being trimmed first with one cut to allow for better line of sight at driveway entrances.  The main roads will be completely trimmed next and then the county roads will be fully trimmed.  Mowing and pot hole repair will be on going from now until frost.

Wright fielded a question about VDOT providing maintenance on Elam Drive.  He says that there is no money currently available from the state to take over and up grade a private road to state standards.  There has been a program of revenue sharing where the state pays a portion and the landowners in the subdivision pay the remainder, but these funds are rapidly disappearing.  Cornell Walker pointed out that the land developer is responsible for the road into the developed properties.  Wade Bartlett, county administrator, clarified the issue by stating that the current county ordinance requires the development have three or more houses before the county can enforce road maintenance.  The Elam Drive subdivision was probably created before this ordinance was approved.

There was also a request to work on ditching to solve drainage issues in front of St. James AME Church on State Road 626.  If you have any concerns about the roads in Prince Edward County, please call the 24-7 number 1-800-367-7623.

Major David Wilmoth of the Prince Edward sheriff’s department warned against scams by phone, mail, or email.  Call the department if you receive any of these contacts.  He also encouraged people to record the serial numbers of all firearms and electronic devices and to store them away from other valuables.  Also take photos of the your home interior and exterior for future reference in case of a break in or fire.

There was also discussion about what can be done to attract more businesses to the area and to keep those that are here.  Concern was expressed about the long term effects of blasting that will be done at the new Luck Stone quarry.

With the Democratic primary coming up on June 9, citizens were reminded that parking for voting at the Prospect District precinct will be different because of safety issues.  All citizens will park behind the fire house and enter through the rear.  Handicap parking will be by the side doors.  The voting officials and machines will be in the same room as always.

Supervisor Gray emphasized that he and the other county representatives want to know what to do to make the Prospect community more productive and to continue to grow.  He may be contacted at 392-4292.

The Farm Use String Band will sponsor the Pamplin Old Time Dance on Saturday, June 6, in the Pamplin Depot Freight Room.  The Pamplin Area Legacy Supporters (PALS) will serve a meal of cheesy grits casserole, farm fresh garden salad, farm fresh collards, scrumptious desserts, homemade bread and biscuits, and sweet tea for only $4.  The meal will begin at 6 p.m. with music starting at 6:30 p.m.

The Third Annual Revive Prospect/Revive America will begin on June 7, at 7 p.m. at Calvary Baptist Church, 1144 Hendricks Road, Pamplin. The revival will be held from Sunday, June 7, through Friday, June 12, with seven ministers and choirs participating.  The public is cordially invited and urged to attend.  For more information call the Rev. Clark at 390 – 8067 or the Rev. Joye at 574 – 2011.

Elon Baptist Church will be holding Vacation Bible School June 7 to 11, from 6 p.m. to 8:20 p.m. every night.  The theme will be the adventure of Mt. Kilimanjaro, an epic expedition through Proverbs.  This Saturday, June 6 is Camp K kickoff from 10 a.m. to 1 p.m.  There will be free games, bounce houses, fun and food.  Bring the children for a great time. You can pre-register for Vacation Bible School as well.

Don’t miss the Family Vacation Bible School, June 7 to June 11 at Rocks Baptist Church, Pamplin.  It is for all ages, including an adult group.  Fun starts each evening with dinner at 5:30 p.m. (to make it easier for your entire family to come), and activities start at 6:15 p.m.  There will be games, Bible study, music, crafts, and more.  The adult group will have an introduction to the Bible for people who simply want to know more about the most influential book in history.  They will discuss its origin, history, themes, languages, etc. The material is designed for someone with absolutely no knowledge of the Bible, but even experienced students will benefit from a review of the basics.

The Prospect Volunteer Fire Department Auxiliary meatloaf supper will be Saturday, June 20, from 5 p.m. to 7 p.m.  Cost is a donation at the door.  The meal will include meatloaf, mashed potatoes, green beans, bread, drinks, and desserts.

Paulie and Rayvon Johnson attended Fluvanna High School graduation in Charlottesville on Saturday, May 23, to see Rayvon’s cousin’s daughter Psalm Chaney graduate.  Psalm is the daughter of Bryan and Phil Chaney of Palmyra.  She plans to attend Penn State University in the fall.

May Shorter was a Thursday afternoon visitor with Dorothy Womack.

For the weekend Paul and Lisa Hoffman went camping at Twin Lakes State Park and were joined for dinner on Saturday night by John and Karen Hagedorn.

Sympathy is extended to the family and friends of Johnnie Lane Baldwin Simpson,.

If you or your local organization has news or announcements to share with the community, please call Edwina Covington (574-6576) or email her at ecovington@centurylink.net with the subject line Elam-area news.

According to a new study by SmartAsset, Buckingham and Prince Edward counties are among the 10 localities with the lowest... read more